Battery Ventures released its State of the OpenCloud report today, providing a set of data points that pretty clearly outline the accelerated growth of cloud services in recent quarters.

The report helps explain the race to invest capital into startups that we’ve been observing over the past 18 months.

The pandemic pushed companies to start using cloud services — infrastructure, platform or SaaS — earlier and quicker than they might have otherwise. That resulted in big investments, eye-popping IPOs, and tremendous revenue growth for software companies of all stripes, especially those built atop open-source code.

Battery believes that the cloud market could eventually be worth $1 trillion. When you consider that the vast majority of work, development and computing will be done in the cloud at some point, the investment group’s round-number projection may prove modest.

This report makes it clear that despite the tremendous growth numbers we have seen recently, we are still just scratching the surface of the cloud’s potential.

That’s our takeaway. While the digital transformation is evident and startling, this report makes it clear that despite the nigh-incredible growth numbers we have seen recently, we are still just scratching the surface of the cloud’s potential.

Amazon’s AWS public cloud platform is big business. Amazon breaks out its results on a quarterly basis, showing the world exactly how much cloud revenue it generates, as well as the resulting operating profit. Microsoft also breaks out growth for its Azure service, but with other services included in the reporting category, the exact number is harder to nail down.

Battery’s report gives us per-platform data. In Q2 2021, the venture capital firm reckons that AWS reached a $59 billion run rate, while Azure hit $37 billion and Google Cloud reached $19 billion — and this was before the companies reported Q3 results. 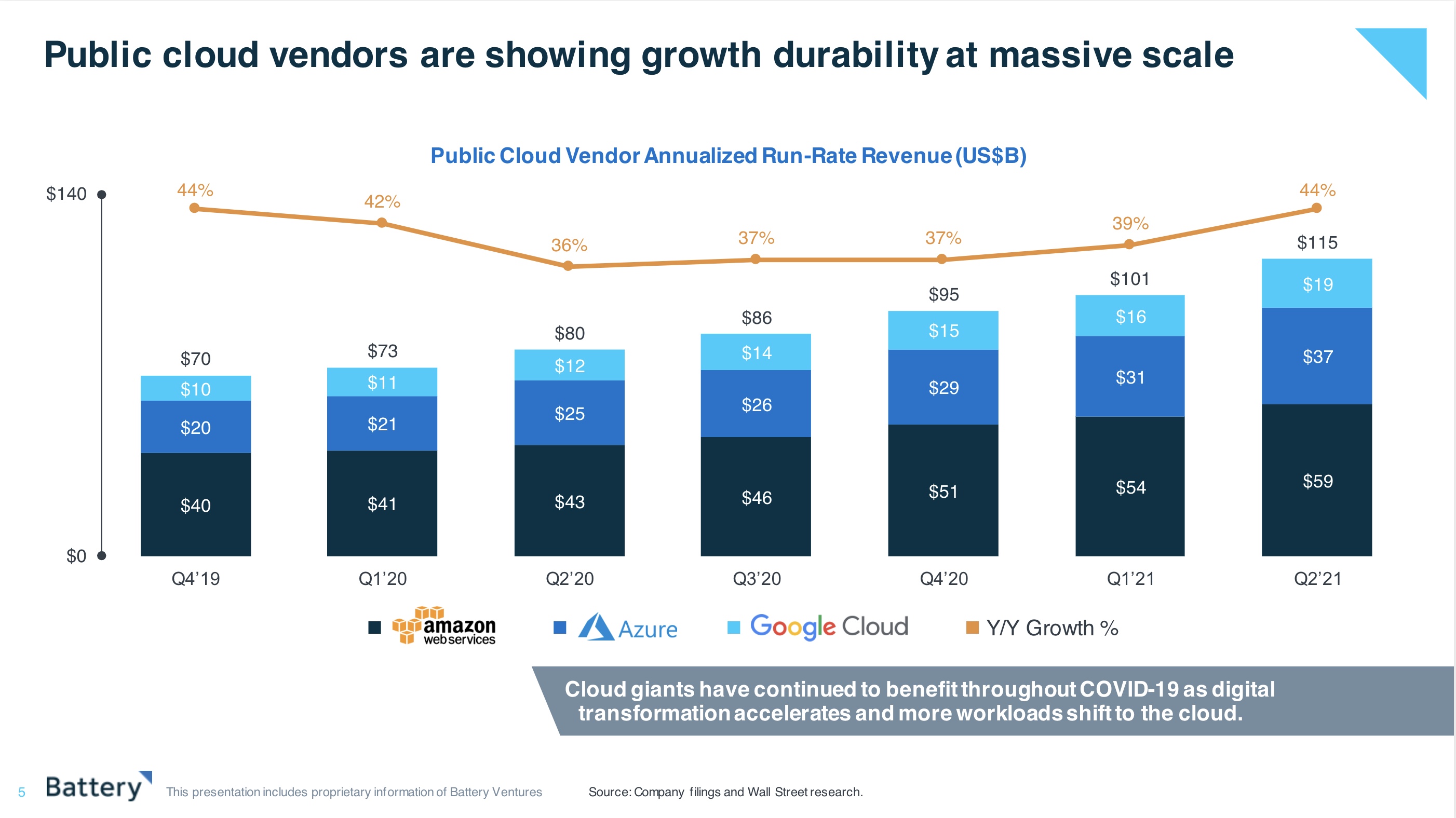 Critically, Battery’s Q2 figures were up an aggregate 44% compared to a year earlier — the growth has accelerated from an early-pandemic low of 36% in Q2 of last year. Indeed, since the second quarter of 2020, public cloud growth has either held steady or risen.

Given the sheer amount of dollars involved in these figures, the acceleration of growth from 36% to 44% is incredibly material: The three cloud platforms closed Q2 2021 on a combined run rate of $115 billion.