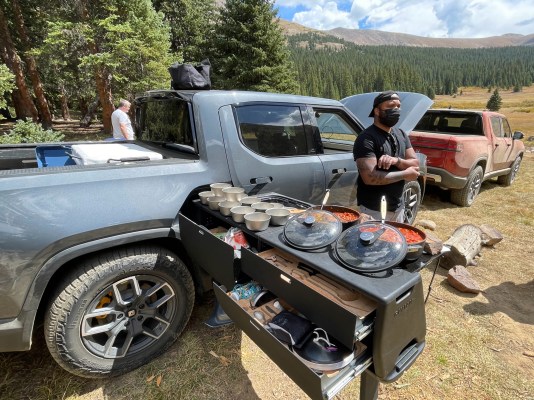 In 2019, Rivian showed up at the Overland Expo West in Flagstaff, Arizona with a prototype of what is now known as the camp kitchen. Now, with production ready 2022 Rivian R1T electric pickup trucks coming off the assembly line, the final version of the kitchen is ready for prime time.

The automaker has made a number of changes to the kitchen since it first debuted, including the addition of two supporting actors: a foundational shuttle system that the kitchen attaches to and a dishware set from Snow Peak.

Also Read  Lessons from a crypto entrepreneur: a conversation with Nader Al-Jani

Below is video that provides an up-close look of the production ready camp kitchen as well as information from Josh Glaser, the company’s senior culinary program manager (aka the food guy) on how the accessory has been used and tested in Rivian’s factory.

A few specs for you. The camp kitchen is a $5,000 optional upgrade. For a limited time, the tunnel shuttle and Snow Peak kitchen set are included. Eventually, buyers who opt for the kitchen will also have to buy the $1,500 Rivian gear tunnel shuttle option, which the kitchen sits on.

This tunnel shuttle holds and powers the kitchen, which locks onto the platform in three sections. Rivian plans to use the shuttle for other accessories in the future. The shuttle has integrated dual power plugs — 120V AC and 12V DC — and can hold up to 200 pounds when extended out from the truck.

There is even a string of lights that can be erected to provide a bit of ambiance at night.