A new app called Push It is sitting at the top of the App Store promising little more than the ability to send “push notifications to your friends.” The app features only two screenshots — one of a big red button and another basic, black-and-red screen with text that says “sending.” So what is going on here? And how is this app No. 1 in five countries when many people who install it can’t even use it yet?

As it turns out, Push It is the latest creation from the makers of the Snapchat platform app, Sendit, which features AR games and anonymous Q&As. 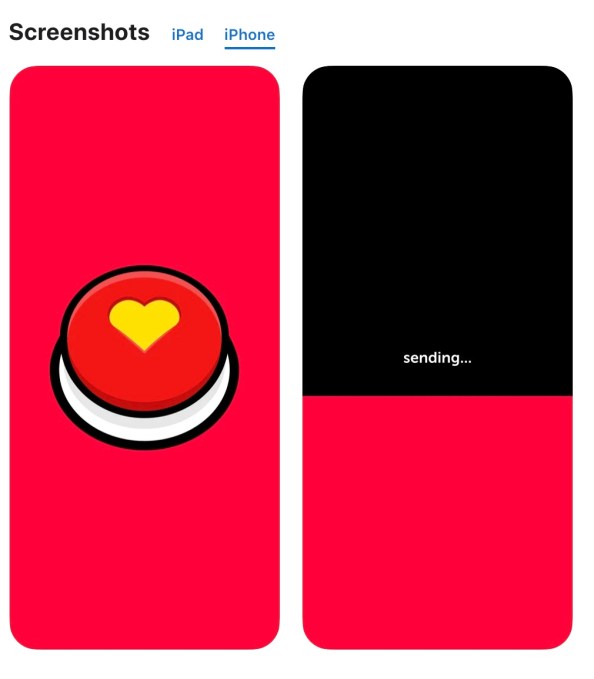 To understand what Push it is all about, you have to first understand the company’s original app, Sendit.

Popular with a younger demographic, Sendit has been steadily gaining traction with Snapchat users who use the app to play games and have conversations with their Snapchat friends. To date, Send it has been downloaded nearly 9 million times worldwide and has generated nearly $3 million in consumer spending, according to Sensor Tower data.

The app recently gained millions of new installs following Snap’s suspensions of Sendit’s top rivals, YOLO and LMK, which were the focus of a lawsuit from a mother whose son died by suicide after being anonymously bullied by users of those apps. Sendit has, so far, escaped a similar fate despite offering anonymous features of its own — like its “ask me anything” game which prompts a Snapchat user’s friends to ask questions without revealing who they are.

Some of Send it’s negative reviews also make mention of bullying, but Snap has yet to take action. When we asked Snap to detail its policy around anonymous apps aimed at minors, we were told the company is in the process of reviewing its app ecosystem and policies, following the hire of its first global head of platform safety.

In addition, some of Send it’s users believe the app is using bots to post questions that their friends would have never asked.

Writes one user in an App Store review: “This app randomly sends you fake/automated questions. For example, me and all of my friends are mid-20s and older and we’ve all gotten the same question about ‘do u have trust issues,’ ‘who’s the best person to copy homework from?’

Another reviewer complains: “Ok so I can tell that the questions are 100% not from anyone I know, in fact I’m pretty sure this is fake. I’m convinced that the questions are from AI. They are just random cheap questions that nobody would ask like “who would you choose to be on your team in a zombie apocalypse?” Like that’s stupid. Nobody just asks that. Make a real app.”

Sendit’s founder Hunter Rice denies that bots are involved. He also pushed back at the idea that Send it’s adoption by teenagers is being driven by anonymity.

“Our users gravitate towards Sendit because of its awesome AR experiences,” Rice explains. “Our mission, and what we’re looking to do, is to find new ways to reduce the friction of sparking conversations with friends. We discovered this really engaging format through these AR games. That’s really the magic behind Sendit and why it’s been so successful,” he says.

Today, Sendit offers games like “Never Have I Ever,” “Truth or Dare,” and others that appeal to a young crowd. It also lets users ask questions like “Who do you ship me with?” or “Confessions — say who you have a crush on,” and “Compatibility test” which reflect the kinds of things that a teenager would want to chat about among friends.

Similarly, Rice says his team’s new app Push it is also about coming up with new ways to encourage conversations.

Except, in this case, it’s not promising AR Lens games and Q&As for Snapchat, but a basic tool for pushing notifications directly to friends’ iPhones.

“With Sendit, we found this great format within these AR interactions and that’s been going great. So, we wanted to replicate that same mechanic using a different format,” Rice says.

In case it’s not clear by its minimalist App Store listing, the new app offers a basic follower/following model and lets users send out a push notification to everyone who subscribes to you on the app. Those followers can then respond to that notification to spark a one-on-one conversation, similar to Sendit.

This could be something adopted by a group of friends or even used by creators or brands, the company believes.

To work, Push it requires full access to your Contacts database on your iPhone. It also offers tools to invite friends via text messages. It puts an “OK” button next to a friend’s name who’s in need of an invite which, when pushed, will create a text you can send them to join.

Amid today’s push for increased privacy, SMS-based growth mechanics are generally looked down upon after years of over-zealous app invite spamming became the norm. Fortunately, however, Push it doesn’t auto-text your friends. (However, the app’s privacy policy doesn’t do much to assuage fears about what it’s doing with your personal data. It’s clear that data will be used for marketing purposes and shared with Push it’s vendors and business partners, the policy says.)

The app also brazenly solicits 5-star reviews. When you tap the star icon, a pop-up window appears that promises you a “special message” if you rate the app 5 stars on the App Store.

The Push it iOS app was published to the App Store in late October, previously under the name “Project Red,” according to Sensor Tower data. It only become available to select markets as of last night, including Australia and California. To see it already at No. 1 makes for a suspicious launch — one that typically indicates having relied heavily on pre-launch marketing or growth hacks, as is now common. (See also: springtime chart-topper Poparrazzi, which growth hacked its way to No. 1).

But Rice claims that’s not the case.

“All the excitement around Push it has been entirely organic,” he claims, though admitting the company used social media to hype the app’s launch. Currently, the Push It Instagram account has roughly 32,000 followers, for example.

But Sensor Tower data indicates the app has already gone viral in five countries as of today. It’s No. 1 in the U.S., Canada, Bermuda, Ireland, and Norway, the firm says. It’s also in the top 10 in Great Britain, the Netherlands, Australia, Finland, and New Zealand. (Many of these countries aren’t listed as launch markets per Push It’s Instagram, we should note).

What’s odd about the app’s No. 1 status is that the app is basically non-functional in the markets where it’s not yet live, which today includes most U.S. states. You can use the app to claim your username and…well, that’s about it. Then you have to wait for your market to be flipped on.

Rice says the staggered rollout strategy was meant to ensure Push it could handle the traffic, but it seems to have confused a number of users, who are commenting things on Instagram like “Bruh when is it gonna work” or “what’s the point of this” or “I’m so confused lmao.”

Push it and Sendit are built by a small team of ten at Fullsenders, based mostly in Santa Monica. The company has an undisclosed amount of funding. But we guessed at least one of its angels correctly:

The test for Push it now is whether or not it can sustain such a high ranking in the App Store — organic or otherwise — something that’s proven difficult for other newcomer social apps. It may also have to contend with the coming regulatory crackdown on social experiences designed for minors and younger teens. If Push it gains traction, it may have to rethink its privacy policy and forthcoming revenue models.

For the time being, however, Push it is not making money.

“Right now, we’re really just focused on building an amazing community and creating great features that users want to engage with,” Rice says. “And if we can provide value in the product itself, we’ll be able to come up with a business model that works best for the company.”

Push it is only available on iOS.