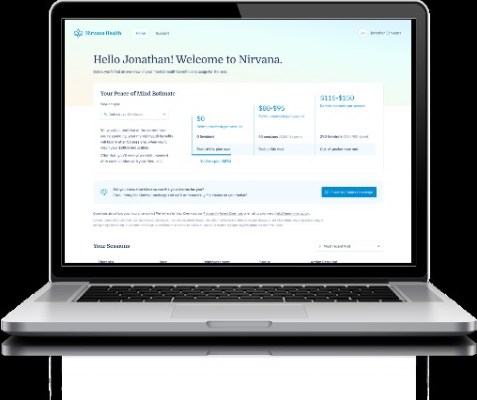 As funding pours into mental health tech, one thing remains relatively unchanged: complex insurance billing. Now, even that medieval process is starting to attract startup interest – from companies that scan claims for errors, to others looking to simplify filing itself.

Nirvana Health is one of the latter. It’s a software platform looking to smooth out the process of filing mental health insurance claims. The company announced a $7.5 million seed extension round on Tuesday – bringing the company’s total funding to about $12 million.

Founded in 2020, Nirvana has built a personalized clearinghouse designed to file insurance claims for therapists, and chase payment. The company will also file claims on behalf of people receiving therapy, provided they have an out-of-network insurance benefits with an insurer supported by Nirvana, and a therapist who works with the company. So far, the company works with major insurance providers like Cigna, Aetna, United, and Anthem.

With this current round, co-founder and CEO Akshay Venkitasubramanian says the company plans to become more than a hub for insurance claims. Nirvana also sees itself as a decision-making partner for therapists.

“We go to therapists office to basically help them streamline and centralize insurance operations,” Akshay Venkitasubramanian told TechCrunch. “We essentially play that role of being a financial partner to them. We help them think through questions like: What platforms are sending me more clients? How much is it? Is a membership fee for this website worth it?”

In the healthcare industry as a whole, insurance complexity does account for a large amount of wasteful medical spending in the US – about $300 billion is wasted on complex medical billing every year, per one estimate published in JAMA in 2019.

In the mental health space, out-of-network coverage plays a large role in that complexity. Per a 2019 report commissioned by the non-profit Mental Health Treatment and Research Institute, mental health visits are 5.4 times more likely to be out of network compared to primary care visits. But even if mental health coverage is in-network, mental health is generally a carve-out service, says Venkitasubramanian. Which means that even if a therapist does take one primary insurer, they might actually need to bill a different company.

For better or worse, Venkitasubramanian believes those problems have created a niche for this technology. In lieu of actually intuitive systems, technology can at least help people navigate the existing ones.

Also Read  Crafting a pitch deck that can’t be ignored

“It’s supposed to be technology’s job to look at an insurance card and tell you: hey, this is a mental health vendor for this insurance, and here’s how the claim should count,” he said. “So we wrote a lot of logic around it. We can automatically file claims and ensure that the claims get routed to the right place and get paid faster.”

Nirvana Health is also betting that things are likely going to get more complicated before they get better. The explosion in new forms of teletherapy leaves therapists, from Venkitasubramanian’s perspective, scrambling to decide which services make the most sense for them to join, and how to manage appointments and billing from each one of these new platforms.

“Not one partner is talking about, hey, what does it mean for you as a therapist in this new world? What are your revenue goals? Let’s figure out whether this is the right opportunity for you to pursue or not.

“So we play that unique middle role of helping them understand this new landscape,” he said.

Silicon Valley Bank’s Q3 trends report suggests investment in mental health services will surpass $3 billion this year. And, as the report notes, funding is increasingly targeted towards enterprise facing companies, including employers or payers and providers.

Nirvana has already started to work with some of these big telehealth players that provide therapy across state lines.  The software can integrate with Headspace Health, the mental health coaching platform formed via an August merger between Headspace and Ginger, for instance.

Ultimately, Nirvana is positioning itself as a supply side business, says Venkitasubramanian. But it’s not totally consumer agnostic. This week, the company is launching a tool aimed at consumers as well. Therapists working with Nirvana have access to a “calculator functionality” which allows them to compute the costs of each session, with insurance.

Nirvana is turning that tool into a consumer facing service allowing patients to compute the cost of each visit, and what therapists might be available to them.

It’s not an indicator of a consumer-facing product in the works. Rather, Venkitasubramanian sees it as a “PSA” that drills down on the company’s larger thesis: the insurance landscape is only slated to get more complicated but tech can at least act as a canary in the coal mine.