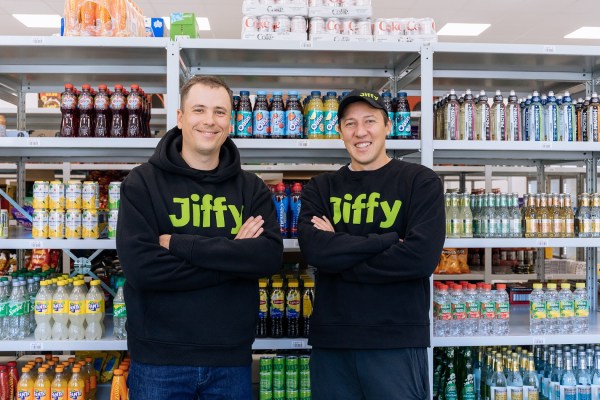 Well that was fast. London grocery delivery upstart, Jiffy — which was only founded in April this year — has nabbed $28 million in Series A funding around half a year after initial £2.6M seed raise. It says it’s now raised a total of $35M.

The grocery delivery startup operates a network of its own dark stores to do fulfilment — enabling it to offer the promise of “fresh groceries in 15 minutes”.

Currently it has eight London stores — now with the funds to expand.

Jiffy tells TechCrunch is has amassed around 20,000 customers so far across its six delivery zones (all in London for now).

The Series A round is led by family-owned investment company Heartland, with Boston-based international VC fund Flint Capital also participating, along with gaming firm Playrix and existing investors Baring Vostok Capital Partners and LVL1 among others.

The fast-following financing is a measure of how hyper competitive the on-demand grocery space has become in the UK capital — as well as being a clear signal investors are impressed with the startup’s early execution.

Other on-demand grocery delivery players operating in London include Gorillas, Weezy, Getir and Zapp. The U.S. unicorn goPuff is also in the mix — having acquired UK startups Fancy and Dija.

Jiffy’s founders describe themselves as “Q-Commerce veterans”. Co-founder Vladimir Kholiaznikov was ex-CEO of Russia’s e-grocery player X5 Food Tech, while fellow co-founder, Artur Shamalov, has also founded a previous food-related startup in Russia. Both have also dabbled in investing themselves — so likely have a burgeoning contacts book to tap when they go fundraising.

Jiffy says its typical customers are families and middle aged grocery shoppers who are switching to its app from traditional convenience supermarkets and online weekly shops. “We are betting this trend will only accelerate as we become a more mature service,” says Kholiaznikov.

The Series A funds will go on expansion within London — and maybe also further afield, as Jiffy eyes moving into other urban locations in the UK.

“We are definitely aiming to cover London inside of the M4 by end of the year,” Kholiaznikov tells TechCrunch. “Jiffy might move to towns as pilot this year but we will see later.”

The “long term” plan is that “all towns with 100k+ population are on our radar”, he adds.

“We are building a nationwide company but will also explore other markets though an alternative route — we are providing our Q-commerce tech platform to selected local players in international markets (for example, we are a partner of Send in Australia),” Kholiaznikov also says, adding: “We will continue this route as well to add value to our core business and shareholders.”

While there is a smorgasbord of startups vying to delivery groceries and/or snacks to citydwellers in the UK, Jiffy’s offer puts speedy delivery of fresh produce front and center which looks like a smart differentiation vs operators that mostly want to ship easy to handle produce like bottles of pop and crisps.

Additionally, though, there are a raft of food delivery apps also trying to nibble into the traditional weekly grocery shop — very familiar names like Deliveroo, JustEat and Uber Eats — mostly focused on meal delivery from restaurants but some have been bolting on light groceries picked from stores they don’t operate.

Going after the full weekly grocery shop, as Jiffy and multiple other startups are, looks like a bigger logistics and execution challenge — certainly with a promise of 15 minute delivery — but also has the potential to be a more sustainable and lucrative business vs just catering to sporadic convenience needs and snack cravings, even if the ops are more complicated.

At the same time, there are not only startup rivals for Jiffy and co to worry about here too; traditional supermarkets have made huge profits during the pandemic — and could certainly splash plenty of cash to dial up their delivery services. But this is also where leaner startups can steal a march by delivering on their promise of hyper fast delivery, albeit with less product choice.

Also Read  DotCom Therapy raises $13M to provide therapy for kids, in and out of school

In addition to grocery delivery, Jiffy is adding ‘Click & Collect’ ordering — which is currently offered at two of its London stores, giving its customers more choice about how they get their groceries.

It is also avoiding the myriad (legal, ethical, reputational and logistical) pitfalls of gig work; Its e-bike and moped-riding delivery couriers are liveried employees.

Another differentiating twist to its model is the aforementioned open Q-Commerce play.

“This means, we provide our ready-to-go IT platform that other companies can use to launch their own quick-commerce stores,” notes Kholiaznikov.

Commenting on Jiffy’s Series A in a statement, Lise Kaae, CEO of Heartland said: “The Jiffy team has managed to impress us with their ambitious plans and effective execution, and we are excited about the journey ahead operating in a highly dynamic and exciting growth market.

“We strongly believe in the large and untapped potential of the e-groceries market in the UK and the ultra-fast delivery business model developed by Jiffy. The company is led by a very experienced team of founders and the current round would enable Jiffy to further accelerate growth. We are glad that the fund of Baring Vostok is a part of this exciting story.”