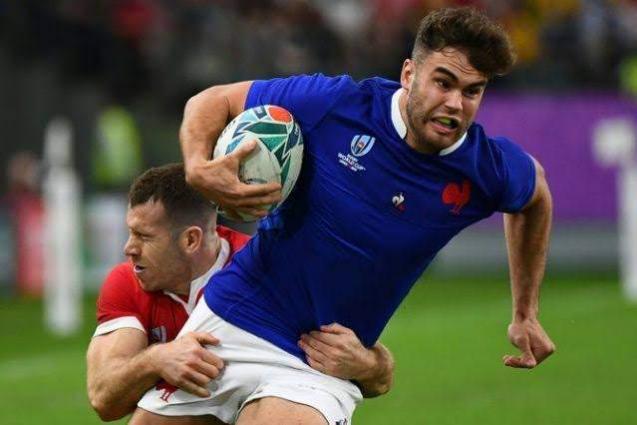 Penaud, 23, who was named to start Les Bleus’ opening game of the tournament in Paris on Sunday, had heavy strapping on his left calf during the eve-of-match training session at the Stade de France.

“He had a muscle problem at the start of the session so he’s undergoing tests and we will see what the results from the tests will be,” Ibanez said at a press conference.

“We hope the results won’t be too significant,” he added.

Ibanez and head coach Fabien Galthie’s option to replace Penaud on the left-wing would be three-time international Vincent Rattez, who is on the bench for the visit of the Rugby World Cup runners-up.

Earlier in the day England attack coach Simon Amor said he was prepared for the “wonderful threats” among France‘s three-quarters.

Amor, 40, who replaced Australian Scott Wisemantel after the Rugby World Cup final defeat last year, will see his side line up against the likes of Penaud and in-form Virimi Vakatawa and Teddy Thomas.

“If we give them space we know how dangerous and capable they are. It’s really important that we don’t give them that space, that we maintain a real tight composure around them,” he added.

Former England and Team GB sevens head coach Amor praised centre Vakatawa, who featured for France in the shorter form of the sport at the Rio Olympics in 2016.

The Racing 92 midfielder has crossed seven times in 10 games for his club this season in his third campaign back in the longer format of the game.

“He was phenomenal for the French sevens team and was a constant threat. To see the progress and the transition he has made and to take that attacking threat into the 15-a-side game has been excellent,” Amor said.

“He is a danger man and is playing well at the moment as well. We’re well aware of that. We have some great players ourselves. We think we’re able to contain him,” he added.

Cannavaro urges Italy to summon spirit of 2006 to beat coronavirus

No let-up in coronavirus deaths in Italy, new cases steady